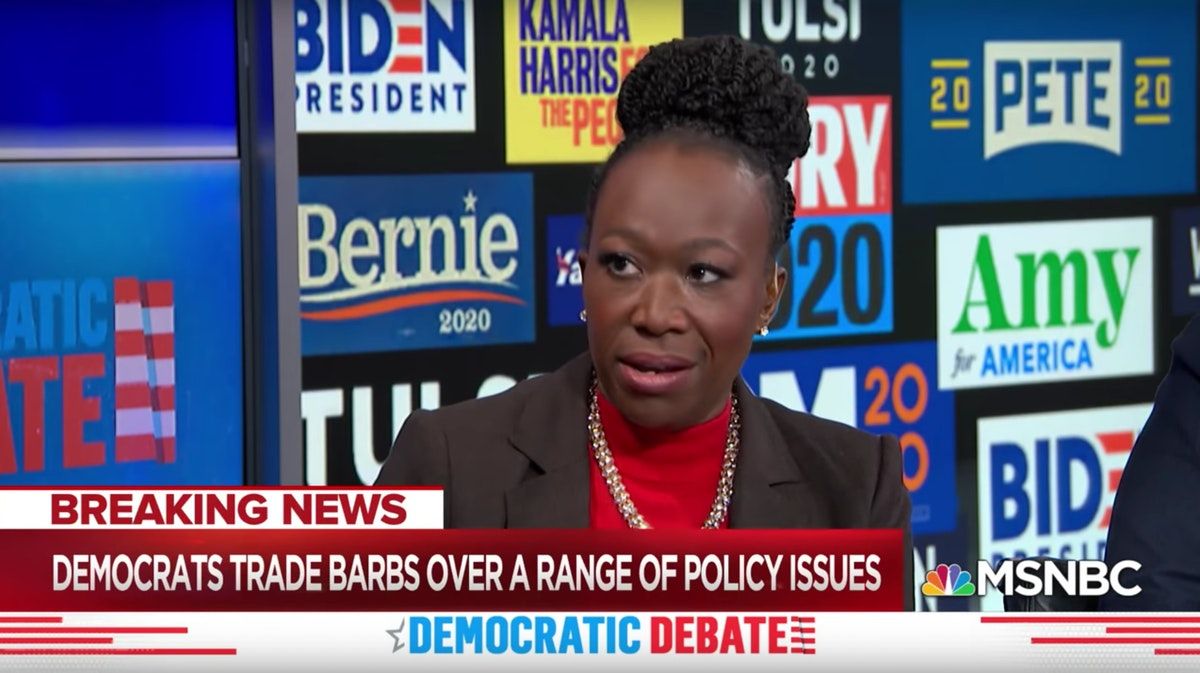 ***The following journalism was funded entirely by readers like you. If you like what you read, please subscribe to our member newsletter for $5/month or more.***

Democratic presidential candidate Tulsi Gabbard has polled in the single digits since she launched her campaign. She did not qualify for the CNN debate in October then regained her spot in the MSNBC debate on November 20 after Hillary Clinton smeared her by suggesting she may be a “Russian asset.”

But there is such rage among the political and media establishment when she opens her mouth to speak. Her very presence drives them to maliciously advocate for her cancellation immediately after each debate.

United States foreign policy typically receives minimal attention in presidential debates. It pops up in the last hour of a debate after one or two hours of focus on domestic policy issues, such as health care, taxes, paid family leave, income inequality, etc.

The organizers of the debates routinely direct their ire at Gabbard because they can use her as a cudgel to ensure candidates do not stray too far outside of the foreign policy consensus in Washington. She is also useful for Democratic Party leaders, who wish to set an example and discourage critiques of the Democratic Party itself.

Gabbard’s speaking time in the debate was extremely limited, and the first question she was received was not about any particular issue or policy she has proposed. Ashley Parker, a Washington Post reporter and one of the debate moderators, asked her the following:

Gabbard, an Iraq War veteran and active duty member of the military, answered, “That our Democratic Party, unfortunately, is not the party that is of, by, and for the people. It is a party that has been and continues to be influenced by the foreign policy establishment in Washington, represented by Hillary Clinton and others' foreign policy, by the military industrial complex, and other greedy corporate interests.”

She indicated she launched a presidential campaign to end the “Bush-Clinton-Trump foreign policy doctrine of regime change wars, overthrowing dictators in other countries, needlessly sending my brothers and sisters in uniform into harm's way to fight in wars that actually undermine our national security and have cost us thousands of American lives.”

Gabbard continued, “These are wars that have cost us as American taxpayers trillions of dollars since 9/11 alone, dollars that have come out of our pockets, out of our hospitals, out of our schools, out of our infrastructure needs. As president, I will end this foreign policy, end these regime change wars, work to end this new cold war and arms race, and instead invest our hard-earned taxpayer dollars actually into serving the needs of the American people right here at home.”

Her answer came as the Costs of War Project at Brown University recently estimated spending on the “War on Terrorism” has totaled at least $6.4 trillion.

“When Donald Trump was elected, not even sworn in, [Gabbard] buddied up to Steve Bannon to get a meeting with Donald Trump in the Trump Tower, fails to call a war criminal by what he is as a war criminal, and then spends full time during the course of this campaign, again, criticizing the Democratic Party,” Harris added.

Gabbard called Harris’ reply “ridiculous” and pointed out that it trafficked in lies, smears, and innuendos without challenging any of the substance of her argument, which is that the Democratic Party is far too supportive of the permanent warfare state. “I'm not going to put party interests first. I will put the interests of the American people above all else.”

Later in the debate, Gabbard went after Pete Buttigieg, the Democratic mayor of South Bend, Indiana, who is a presidential candidate. She suggested he lacked experience necessary to be the country’s “commander-in-chief.”

“I think the most recent example of your inexperience in national security and foreign policy came from your recent careless statement about how you as president would be willing to send our troops to Mexico to fight the cartels,” Gabbard said.

Trump suggested it may be necessary to send U.S. troops into Mexico to help the Mexico government fight drug cartels. Buttigieg was asked on November 19 whether he would send U.S. troops into Mexico if he was elected president. He answered, “There is a scenario where we could have security cooperation as we do with countries around the world,” particularly if Mexico welcomed a troop deployment.

Buttigieg resented the attack and misconstrued Gabbard’s disagreement. “Do you seriously think anybody on this stage is proposing invading Mexico?”

He resorted to targeting her for meeting with Syrian President Bashar Assad, as all critics who vilify Gabbard reflexively do.

“If your question is about experience, let's also talk about judgment. One of the foreign leaders you mentioned meeting was Bashar al-Assad. I have in my experience, such as it is, whether you think it counts or not since it wasn't accumulated in Washington, enough judgment that I would not have sat down with a murderous dictator like that,” Buttigieg declared.

However, Gabbard parried this tired line rather well, noting the history of presidents who have met with leaders of countries considered to be enemies of the United States.

“What you've just pointed out is that you would lack the courage to meet with both adversaries and friends to ensure the peace and national security of our nation. I take the example of those leaders who have come before us, leaders like JFK, who met with Khrushchev, like Roosevelt, who met with Stalin.”

She continued, “Like Reagan, who met and worked with Gorbachev. These issues of national security are incredibly important. I will meet with and do what is necessary to make sure that no more of our brothers and sisters in uniform are needlessly sent into harm's way fighting regime change wars that undermine our national security. I'll bring real leadership and experience to the White House.”

Journalist Glenn Greenwald noted President Barack Obama was “willing to meet, without precondition, during the first year of [my] administration, in Washington or anywhere else, with the leaders of Iran, Syria, Venezuela, Cuba and North Korea, to bridge the gap that divides our countries.”

Also, Greenwald pointed out that Democratic Speaker Nancy Pelosi flew to Damascus and met with Assad in 2007, even as President George W. Bush claimed Assad was killing U.S. troops in Iraq.

Neither Obama nor Pelosi consistently have to answer for their willingness to engage in diplomacy. It is only Gabbard who is defined by one moment in her political career because unlike Obama and Pelosi she is skeptical or opposes key aspects of a foreign policy rooted in perpetual war.

REID: With Tulsi Gabbard, the challenge with Gabbard is, yes, as somebody who was very much against the Iraq War. I got out of news really, initially because of my opposition to the Iraq War. I think a lot more people than we know feel that way, even people who have military backgrounds, who say why did we do this. Why did we spend our country’s human resources on this war? And I think it was a lot of the reason that Barack Obama was a viable candidate for president, is that he could see ahead that this was not a wise idea. And I think a lot of Democrats preferred him over Hillary Clinton in 2008 because of that.

I think the challenge that Tulsi Gabbard is having is that you can feel that way about the Iraq War—as I definitely did but also find it odd that the way she talks about regime change wars is much the same way as Russia talks about them.

“She uses this language that feels straight out of kind of the Kremlin,” Reid additionally remarked. MSNBC’s Brian Williams agreed.

“It is odd. And that she went to see Bashar al-Assad and cannot take away from her interaction with him or her observation of him that he is a criminal, who is not just hurting random people. He’s hurting his own people,” Reid concluded. “That you can’t see what he is is also a weird Kremlin-y view she has of the world that makes her an odd fit for a party of Democrats. I’m not sure what even she’s doing.”

Reid never articulated what makes this a “Kremlin-y view” nor did she cite examples of Russian politicians, who talk like Gabbard. She never acknowledged that there are Democrats, who have met with Assad, because he is the leader of Syria.

Her objection is telling, given that she agrees it is acceptable to oppose the Iraq War. She understands why Gabbard is opposed to certain wars based upon her background in the military, but the issue she has with Gabbard is how she goes about expressing her opposition.

What does a Democratic presidential candidate have to do to speak out against military interventions? The answer seems to be avoid meeting with the leaders of countries that the U.S. targeted with regime change operations.

Senator Bernie Sanders, a Democratic presidential candidate, said during the same debate, “We have to rethink the entire ‘War on Terror,’ which has caused so much pain and lost so many lives, not only for our own men and women in the armed forces but for people in that region as well.”

Harris said in a CNN interview following the debate, “There have been so many attacks by her against the Democratic Party, against the very structure of how we do our work, that I felt the need to talk about it.”

What Harris was responding to is her challenge against how the Democratic Party engages in foreign policy. Gabbard favors peace talks between Trump and Kim Jong-un of North Korea while Harris would escalate tensions by restarting military exercises with South Korea that North Korea views as a provocation. She, and others, attack Gabbard precisely for these views.

Trump and Republicans currently recognize that they can use Gabbard to drive a wedge into the Democratic Party. Democrats blame her for their opportunistic support intended to manipulate and fuel division, which she has no control over.

Gabbard made it clear when she met Assad in January 2017 that she originally had no intention of meeting him. She stated, “I think we should be ready to meet with anyone if there’s a chance it can help bring about an end to this war, which is causing the Syrian people so much suffering.”

But this is not about Asssad nor is it about support from Trump and Republicans. Democrats have engaged in a disinformation campaign against Gabbard since she announced her campaign in January because they believe she betrayed them in 2016, when she resigned from her position as Democratic National Committee Vice Chair in 2015 and later endorsed Sanders.

It is possible Sanders will be the next target after Gabbard drops out of the presidential race. Her presence may insulate him. It may also lead staff in the Sanders campaign to think twice about taking certain positions on foreign policy, though Sanders was one of the only candidates to call what has unfolded in Bolivia a military coup.

Regardless, the Democratic Party establishment despises how Gabbard criticizes Clinton and calls into question their role in advancing policies of war. She is conveniently labeled a favorite of Russian bots or trolls, or worse, a witting or unwitting asset of the Russian government because they do not know how to control her, and incidentally, their behavior has helped her garner a loyal following that is keeping her in the presidential race.