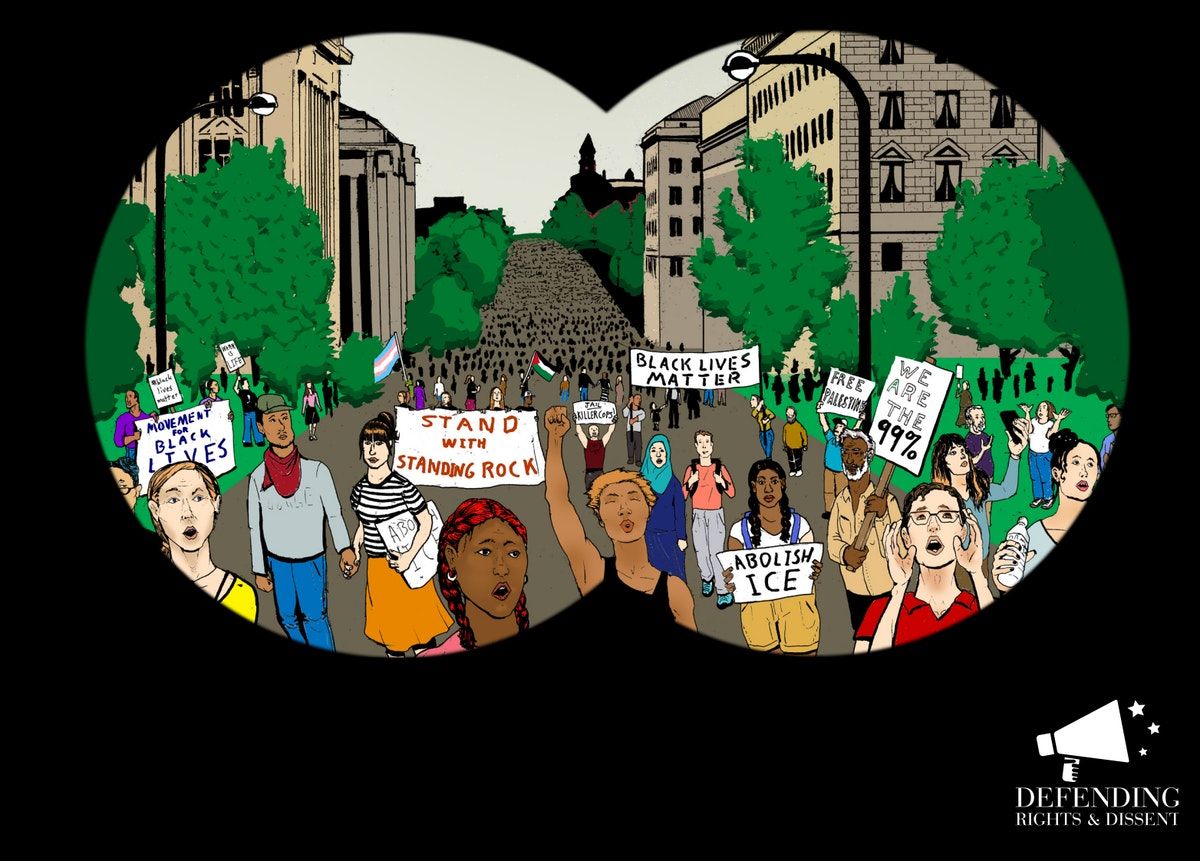 Shadowproof is an independent media organization funded entirely by members and donations from readers. For $5/month, you can subscribe to our weekly member newsletter.


The FBI raided the homes of 23 anti-war, labor, and international solidarity activists in Chicago, Minneapolis, and other parts of the Midwest on September 24, 2010. They were issued grand jury subpoenas and informed they were under investigation for “materially supporting” foreign terrorist organizations.

More than 50,000 pages of materials, including notebooks, family photos, membership lists for antiwar groups, and other political documents, were seized by the FBI and copied for the agency’s records.

All of the activists refused to cooperate with the grand jury. None of the activists were ever charged with crimes. Yet, in the nine years since the raids, the FBI cooked up political cases that were brought against two longtime activists who associated with them: Carlos Montes and Rasmea Odeh.

Kevin Gosztola, who is based in Chicago, covered the raids days after they occurred. He published multiple reports in 2010 and 2011, including profiles of a couple of the activists that were targeted.

The cases of the Midwest 23 receive renewed attention in a report on the FBI’s investigation, monitoring, and surveillance of First Amendment-protected activities.

The report was written by Chip Gibbons and released by Defending Rights and Dissent. It covers political spying since 2010, which is when the Justice Department’s Inspector General Office last conducted a review of the FBI and the First Amendment.

Gibbons makes a crucial point about the manner in which political spying by the FBI is often treated. It is typically seen as part of some “historical epoch” that occurred during the era of J. Edgar Hoover. Or it was part of an “overzealous response” to the September 11th attacks.

“When contemporary accounts of political surveillance are discussed, they are treated as isolated incidents. A report of a Palestinian solidarity activist receiving door knocks from FBI agents is treated as an entirely separate and unrelated event to FOIA revelations about an investigation into environmental activists,” according to Gibbons.

As Gosztola reported, files from the FBI revealed an undercover FBI agent who called herself Karen Sullivan infiltrated the Antiwar Committee (AWC) as they organized a march against the 2008 Republican National Convention in St. Paul. Activists raided in 2010 were associated with this group.

The undercover FBI agent later infiltrated a chapter of the Freedom Road Socialist Organization (FRSO) and passed along information to the FBI about the organization’s private operations.

The report summarizes, “Sullivan appears to have recorded many of her conversations with FRSO members. She claimed she uncovered the FRSO had a secret purpose, plotting to overthrow the U.S. government in a socialist revolution. However, Sullivan does not allege the FRSO had any means or actual plans to do so, and the mere advocacy of revolution is protected by the First Amendment.”

By 2010, the undercover FBI agent faced pressure to develop a case that the Justice Department could prosecute.

Gibbons recounts, “Well into her infiltration, Sullivan turned it into a sting operation and began telling FRSO members that her father had bequeathed her $1,000 to give to the PFLP. She approached numerous members, asking them to accept the money in cash to get it to the PFLP. One member allegedly finally took the cash four months before the raids.”

“Journalist Kevin Gosztola has pointed out numerous problems with the way these statements are interpreted or portrayed in the affidavit. The ‘conspiracy’ was entirely crafted by the undercover FBI agent,” Gibbons adds.

From an affidavit in the FBI files that were unsealed:

On March 4, 2010, UC1 recorded a conversation with [REDACTED]. UC1 told [REDACTED] that UC1’s father had left him/her a package, which included envelopes and a video called “Women in Struggle,” when he recently died. UC1 told [REDACTED] that the video was about women in the PFLP who admitted killing and bombing targets in Israel. UC1 said that his/her father left $1,000 for UC1 to get to the “organization of the women in the video.” [REDACTED] said that they can “get it to our people.” [REDACTED] told UC1 to talk to [REDACTED] at the FRSO Congress meeting in May 2010. [REDACTED] said that “if that’s what you want to do with it, we can get it there” and said that $1,000 “will go far in a place like Palestine.” UC1 said that the $1,000 was for the women “which were the PF.”

To be abundantly clear, the FBI concocted a conspiracy involving a fictional dead father. The undercover agent said their fictional dead father wanted to give some of his estate money to Palestinian resistance fighters, who the U.S. government views as terrorists. This was done to entrap one or more Palestinian solidarity activists so charges of “material support for terrorism” could be filed.

Gibbons outlines several questions that must be asked. The FBI undercover agent purportedly “discovered the FRSO’s secret mission, which was constitutionally protected teaching of standard Marxist-Leninist doctrine, and eventually its alleged material support for terrorism well over a year into her infiltration. Why then was she infiltrating progressive groups in Minnesota in the first place?”

“Why was her infiltration allowed to continue for a full year before she ‘discovered’ the supposed FRSO material support? Much of the information that Sullivan supposedly uncovered through spycraft can be found by searching the FRSO’s website. If Sullivan and the FBI really believed the FRSO had ways to get money to the PFLP, they were surprisingly nonchalant about handing over $1,000 cash to give to the PFLP,” Gibbons concludes.

Odeh was the associate director of the Arab American Action Network (AAAN) in Chicago. She was a member of the PFLP who was arrested in 1969 by Israeli forces and tortured. She immigrated to the United States in 1994, and the State Department knew about her past history.

For two decades, Odeh gained respect in the Chicago community as a women’s rights advocate. But on September 24, 2010, the FBI raided the home of Hatem Abudayyeh, the executive director of AAAN. The Treasury Department froze his bank accounts, and eventually, the U.S. Attorney’s Office in Chicago was interested in Odeh. They requested documents from Israel.

The Justice Department charged Odeh in Detroit with immigration fraud in 2013, when she was 66 years old. She fought the case for over three years. The first judge who oversaw her case had donated $2,000 to the Friends of the Israeli Defense Forces (FDIF) in 2006. The defense demanded Judge Paul Borman recuse himself, and he eventually stepped aside in 2014.

Prosecutors renewed their attacks on Abudayyeh’s political activism as he organized demonstrations at the courthouse in support of Odeh. They argued in a motion that Abudayyeh “engaged in a concerted effort” to “improperly sway the jury that will be empaneled.” Prosecutors requested an anonymous jury and juror sequestration.

Odeh was convicted of immigration fraud in November. Her defense appealed, arguing Judge Gershwin Drain improperly blocked Odeh from providing testimony on torture she survived. An appeals court ruled in her favor in February 2016. She was granted another trial.

Yet, it soon became clear the prosecutors would be even more overzealous at trial if Odeh intended to testify about how she was tortured. They planned to spread allegations from the Israeli government that stemmed from statements made during their interrogations against her. Odeh accepted a plea deal in 2017 and was deported.

“She was a scapegoat. She was the victim of a counterintelligence program effort by the FBI and the government to discredit Palestinian solidarity work in the U.S.,” Odeh’s attorney Michael Deutsch declared. “When they couldn’t make a case against any of those people, she was a convenient target for them and to promote this idea that she was a terrorist and snuck into the country, when in fact it was public knowledge. She was a well-known person.”

The other political case stemming from the FBI raids in the Midwest occurred against Chicano activist Carlos Montes. His home was raided on May 17, 2011, by a Los Angeles SWAT team and FBI agents. They broke down his door. Agents and police entered his bedroom and pointed rifles at him.

Montes was escorted to a police car and informed he was suspected of being a felon who purchased guns. He was sent to county jail because of a frame-up attempt that occurred in 1969, when he was a student at the East L.A. Community College.

In college, he was a part of a student movement that demanded the college offer a Chicano studies program. The college refused so students organized a strike. The L.A. County Sheriff and police deployed on the campus with batons and helmets and arrested and beat students.

The rally was broken up by the police. Montes hopped in a car with his friends and returned to his home. Authorities were there when he arrived. Everyone was pulled out of their cars and Montes was arrested. They claimed he “assaulted and battered a cop at the rally.” Montes thought, “What? Why didn’t you arrest me then?” He claims he was framed.

As Gibbons describes, “State-level charges are not in the purview of the FBI, nor were the seized computers likely to reveal much about his registered firearm. An FBI agent present told Montes, “I want to talk to you about the Freedom Road Socialist Organization.”

On June 5, 2012, the local district attorney offered Montes a deal. If he pled “no contest” to a perjury charge, he would receive no jail time and three years of probation and community service. Montes accepted the deal. Activists targeted in the 2010 raids celebrated it as a victory.

This was, like the report declares, part of a pattern of FBI spying on the activism of peace, racial justice, environmental, and economic justice advocates. “In other words, the same political bias the FBI has displayed for decades seems fully intact.”

No official body has engaged in a major attempt to challenge the FBI’s routine abuses in the past decade.

Gibbons contends, “Constituencies on the left who traditionally have been skeptical of the FBI as a threat to civil liberties now find themselves as the Bureau’s defenders. Constituencies on the right who have advocated expansive police authority to maintain order, thwart subversion, and counter terrorism now find themselves speaking of the FBI’s potential to be a political police.”

Overall, there is bipartisan complicity and indifference toward FBI abuses. The 2010 FBI raids unfolded under President Barack Obama while Eric Holder was Attorney General. Robert Mueller was still FBI director.

Under President Donald Trump, a counter-subversive president, these are exactly the type of political prosecutions that Trump would love to see the Justice Department bring against activists in order to undermine popular social movements best positioned to challenge him.

Which is why it is crucial to read this report from the Defending Rights and Dissent. Its examples of abuse extend beyond the 2010 FBI raids, and the recommendations for oversight deserve to be taken seriously by progressive groups, as well as the politicians who claim to be on the side of struggles for social justice.