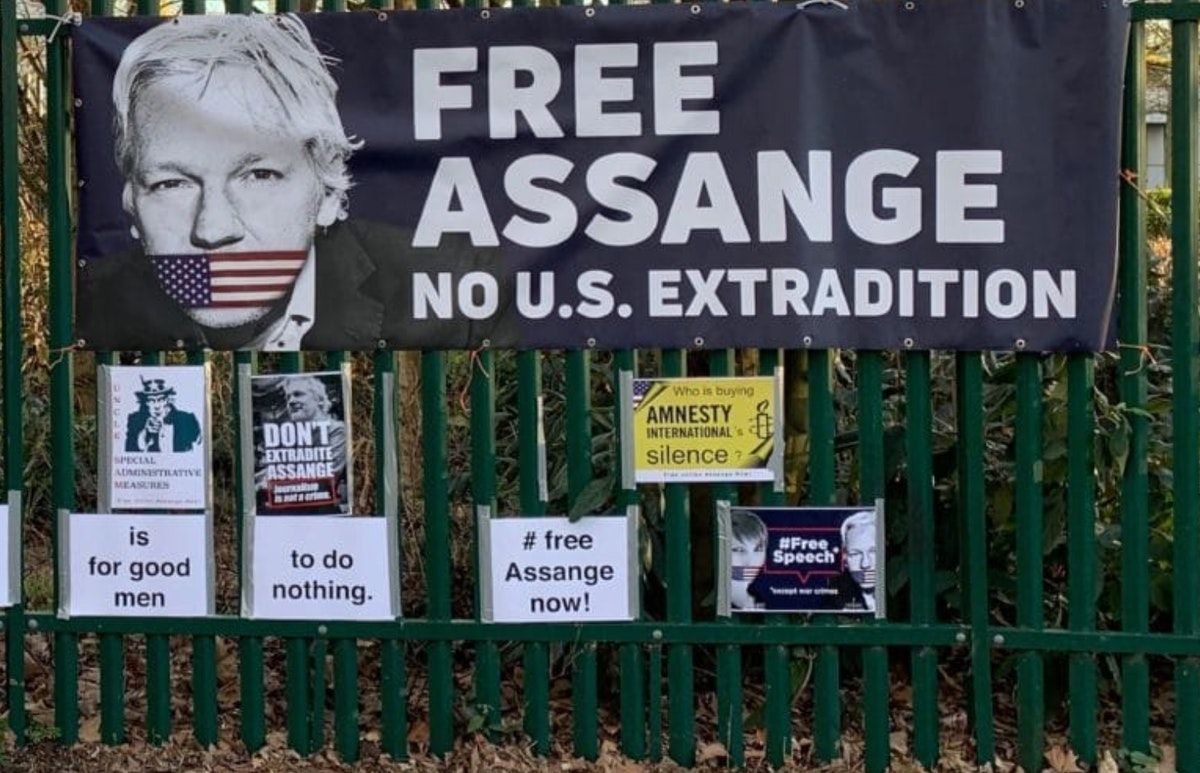 *My apologies for the lack of content shared this week. I took part of the week off to travel and be with family, and I am preparing for an intense month covering proceedings in WikiLeaks founder Julian Assange’s extradition case.

A major hearing in WikiLeaks founder Julian Assange’s extradition case will unfold from September 7 until at least September 24, and I am credentialed to cover the proceedings for Shadowproof.

It will be a key opportunity, and one of the only opportunities, the legal team for Assange has to rebut and undermine the United States government’s request for extradition through witness testimony presented to Magistrate Court Judge Vanessa Baraitser.

Given extraordinary circumstances created by the COVID-19 pandemic, I will be covering proceedings remotely through a “Cloud Video Platform” that was setup by the Central Criminal Court in the United Kingdom to accommodate press, politicians, and trial observers.

The proceedings will focus on the political nature of the prosecution, the misrepresentation of facts, Assange’s political opinions, the risk of denial of justice at a U.S. trial, the risk of cruel and inhuman treatment in U.S. jails and prisons, Assange’s health, and the passage of time since materials were published.

Assange’s legal team contends President Donald Trump’s administration pursued charges against Assange for “ulterior political motives,” and they were not brought in “good faith.” They indicted Assange under the Espionage Act, which makes the extradition a case involving classic “political offenses” that should not be covered by the treaty between the U.S. and U.K.

As made public by the legal team back in February, the following witnesses are likely to “provide testimony on the history of the case and political motivation of the prosecution.” They will also address free speech issues and what makes the case unprecedented.

Carey Shenkman, an academic who studied the history of the Espionage Act and the Computer Fraud Abuse Act

In presenting testimony on the history of the case, Assange’s legal team will likely focus on the publication of materials, such as the “Collateral Murder” video, the Afghanistan War Logs, the Iraq War Logs, the U.S. State Embassy cables, and the Guantanamo Files.

The above witnesses will address Chelsea Manning’s military court-martial, the decision by the Justice Department in 2013 not to prosecute Assange, President Donald Trump’s war on journalists, and denunciations of Assange by public officials in 2017.

Several abuses of the rule of law will be outlined by the witnesses, including the violation of “legal professional privilege,” or attorney-client privilege, through spying on meetings at the Ecuador Embassy before Ecuador revoked his political asylum. They will detail Ecuador’s expulsion of Assange from the embassy, the seizure of Assange’s “legally privileged papers,” and a pardon offer that his team says was considered before charges were announced.

To ensure Baraitser understands the extent to which the U.S. government has misrepresented facts, the legal team will turn to the following witnesses:

Patrick Eller, a former US Army investigator and expert in digital forensics

John Goetz, an international investigative journalist who worked with Der Spiegel in collaboration with WikiLeaks in 2010–2011

Jakob Augstein, an experienced journalist who worked at Der Freitag at the relevant time

Andy Worthington, a journalist who worked collaboratively on the WikiLeaks disclosures relating to the Guantanamo Detainee assessment briefs

Emily Dische-Becker, a journalist who was working in Beirut at the relevant time, in a media partnership with WikiLeaks. She deals with the impact of the revelations and the work done to minimise risk to opposition activists

Sami Ben Garbia, a journalist based in Tunisia, who confirms the efforts made to ensure redaction and the lack of any knowledge or evidence of persons physically harmed as result of the publications

Christian Grothoff, professor of computer science, who confirms that ‘at the time when the WikiLeaks site re-published the unredacted cables the information was already easily available to any technically competent person’

Their testimony will collectively show the extent of exaggerations and fear-mongering by U.S. government officials when it comes to claims that Assange was “reckless” and “endangered” innocent people when he published files from Manning.

Assange’s legal team is expected to argue the prosecution has a lot to do with his “political opinions,” which could help protect him from extradition. They maintain he is a “leading proponent” of openness in society and freedom of expression. He is anti-war and anti-imperialism.

He is a “champion of transparency and the public’s right to access information,” especially when it comes to political corruption, war crimes, torture, and the mistreatment of Guantanamo detainees — all of which made Assange a target of prosecution.

Risk of Denial of Justice

The following are likely to offer testimony on the risk that Assange will be denied justice if brought to trial in the United States.

Eric Lewis, a practicing lawyer in the U.S. who deals with issues both of trial and sentence

Thomas Durkin, a former federal prosecutor who will deal with the history of this prosecution and fair trial issues

This set of witnesses will help Assange’s legal team argue that he will not receive a fair trial, especially since the jury pool will largely consist of U.S. intelligence, military, and government personnel from within the Eastern District of Virginia, where the Justice Department indicted him. Undoubtedly, they all will harbor prejudice toward him for exposing the inner workings of institutions that employ them.

Risk Of Cruel and Inhuman Treatment

On the risk of cruel and inhuman treatment that Assange will likely face in U.S. jails and prisons, the following will likely present testimony:

Eric Lewis, on the issue of sentencing

Yancey Ellis, an experienced lawyer who practices in the very area of Virginia in which Mr Assange’s trial and pre-trial detention will take place

Joel Sickler, a renowned expert on prison conditions in the federal system

Assange’s legal team previously noted the English High Court and the European Court of Human Rights had “profound concerns about the inhumanity of conditions in so-called administrative segregation in the U.S. prison system, amounting effectively to solitary confinement.”

For example, the legal team cites the extradition case of Abu Hamza. Before Hamza lost his extradition case, Lord Judge stated, “Like Judge Workman, we too are troubled about what we have read about the conditions in some of the Supermax prisons in the United States.”

He contended the “confinement for years and years in what effectively amounts to isolation may well be held to be, if not torture, then ill treatment which contravenes Article 3 [freedom from torture in the UK’s Human Rights Act]. This problem may fall to be addressed in a different case.”

Assange has a history of clinical depression and trauma, according to his legal team, and there is a significant risk that he may be driven to commit suicide if brought to the United States.

The following medical professionals are likely to share sensitive details on his health:

Michael Kopelman, a distinguished forensic psychiatrist [who submitted a report to the court]

Paul Mullen, who was his treating psychiatrist in Australia and who has prepared a report on [his condition as of early 2020]

Crosby evaluated Assange’s health on February 23, 2019, and their doctor-patient confidentiality was allegedly violated.

Finally, there is the passage of time since Assange and WikiLeaks published materials from Manning.

No explanation has been given as to why the U.S. government waited several years to indict Assange. As noted, the Justice Department under President Barack Obama backed away from a prosecution in 2013.

Assange’s legal team believes there is a “risk of prejudice” in trying to reconstruct the sequence of events that occurred in 2010 and 2011 because they happened so long ago. They also suggest Assange’s mental state has deteriorated to an extent that he may not be able to participate in his trial.

Court will be in session between 10 am and 4 pm London Time. I will be tweeting live coverage of proceedings from @kgosztola.

I will post a video after each day of court that offers a summary of what unfolded. Then a few hours after the video update, a report on significant development(s) that occurred will be published.

If you’d like to specifically support this work, become a paid subscriber of The Dissenter or go to shadowproof.com/donate.

And thank you to everyone for sharing and supporting this journalism.