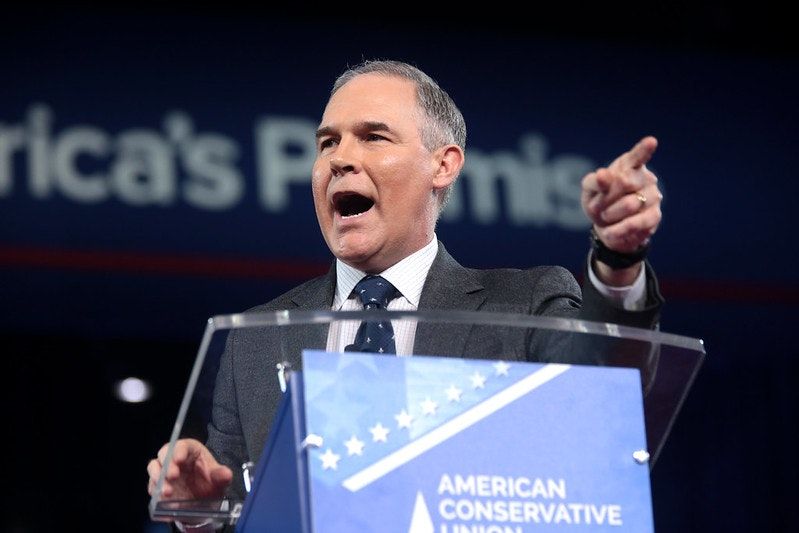 The lawsuit [PDF] says Kevin Chmielewski was a political appointee and worked as Pruitt’s deputy chief of staff for operations. He faced a retaliatory investigation from the EPA’s Office of the Inspector General that “falsely accused” him of “not having a security clearance and covering up a past arrest.”

It claims Corey Lewandowski, a former official for President Donald Trump’s 2016 campaign, told the whistleblower that Pruitt “knew about his disclosures.” After Chmielewski refused to “violate laws and federal rules and made disclosures to officials outside of the EPA,” Pruitt assigned his responsibilities to another employee.

Furthermore, according to the lawsuit, Charles Munoz, the White House liaison for the EPA, informed Chmielewski on February 12, 2018, “Pruitt wants you to resign effective immediately.” He was urged to “sign a resignation form” because if he was fired he would “lose his clearance and never get another job in the federal government.”

The EPA allegedly sent Chmielewski documents on April 20, 2018, that falsely represented he resigned from his job.

Helena Wooden-Aguilar, the EPA deputy associate administrator for the Office of Policy, and Justin Fugh, the EPA senior counsel for ethics, both warned “[Pruitt’s] chief of staff Ryan Jackson not to make statements to the effect that plaintiff was removed because he went to Congress, human resources, or other officials.”

Oversight of Pruitt’s “compliance with expense, budgetary, personnel use, record keeping, and email policies and regulations” were not duties assigned to Chmielewski. Nor was it part of his job, according to the lawsuit. He simply did not want to be part of this misconduct.

He demands that his employment at the EPA be reinstated or that the Energy Department hire him to a position he was promised earlier in 2020.

Multiple scandals erupted around Pruitt’s abuse of taxpayer dollars and how he used the position to enrich himself and his family.

The disgraced EPA administrator was too much of a liability for the Trump administration and resigned on July 5, 2018.

“[Pruitt] spent more than $120,000 of public funds during a June 2017 trip to Italy that an EPA lobbyist organized under the guise of a meeting with environmental ministers from G-7 countries,” the lawsuit declares. “This trip included a $30,500 security detail and nearly $90,000 spent on food, hotels, commercial airfare, and an $11,000 military jet used by the Administrator and nine of his staffers.”

Although commercial flights were available that were “faster and cheaper,” Pruitt still had the EPA shell out $11,000 for this flight that took him and his staff from Cincinnati to New York for the trip to Italy.

Chmielewski “objected that travel logistics or expenditures were not allowed,” and Pruitt allegedly replied, “I don’t care. I’m a Cabinet Secretary. Make it happen.”

Pruitt also approved a first-class return trip from Morocco for an EPA official. But Chmielewski insisted that violated regulations and refused to sign paperwork for the trip.

While Pruitt ran the EPA, he issued a “blanket waiver” so officials could fly first class. He stayed in some of the “most expensive hotels in violation of the travel policies and regulations. His travel often exceeded the prescribed 150 percent per diem rate without appropriate justification and approval.”

Falsifying A Calendar To Hide Meetings With Corporate Representatives

Pruitt, who is no longer a closeted lobbyist for the fossil fuel industry, rented a condo from the head of Williams & Jensen, a lobbying firm.

“One of the firm’s clients in 2017 was Cheniere Energy Inc., which owned an active liquefied natural gas (LNG) export plan at the time, a matter of regulatory concern to the EPA,” the lawsuit recalls.

Chmielewski was present for meetings between May 2017 and February 2018, where Pruitt and officials discussed removing meetings with coal, mining, oil industry, and fertilizer businessmen/lobbyists from a “secret calendar.” He changed entries to “staff meeting” on the public to conceal this activity.

“EPA staff were directed to falsify the Administrator’s official schedules after the meetings took place so the public, and the EPA would not know of meetings with lobbyists.”

Several of the lobbyists involved in fertilizer companies were from Oklahoma, where he was attorney general.

In April 2018, Chmielewski provided detailed information to the House Oversight and Government Reform Committee about what he observed and endured when challenging this conduct.

“I hate to take a credit for a man losing his job, but I guess I’d have to say that I take the credit,” Chmielewski told The Hill.

He tried to find work and was informed by the Energy Department that he would be hired on March 31. Yet, a little more than a week after, he was told by the White House Personnel Office there would be no place for him in the Trump administration.

Chmielewski is one of dozens of employees, who have lost their job in the federal government during the Trump presidency because they were not “loyal” enough. They may never work in government again, despite the fact that they seem to care whether rules or regulations are followed.

“It’s not a secret that we want people in positions that work with this president, not against him, and too often we have people in this government—I mean the federal government is massive, with millions of people—and there are a lot people out there taking action against this president and when we find them we will take appropriate action,” Gidley added.

On October 21, Trump issued an executive order that re-classified numerous federal government positions so the administration would have more authority to fire employees if they speak to the media.

“The federal government benefits from career professionals in positions that are not normally subject to change as a result of a presidential transition but who discharge significant duties and exercise significant discretion in formulating and implementing executive branch policy and programs under the laws of the United States,” the order states. “The heads of executive departments and agencies (agencies) and the American people also entrust these career professionals with non‑public information that must be kept confidential.”

From loyalty pledges to gag orders, what happened with Chmielewski is but one example of what could become increasingly common and unremarkable in government if the free speech rights of federal government employees are not defended.